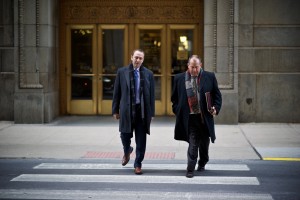 At Karlin, Fleisher & Falkenberg, LLC, we are honored to have the opportunity to put our legal resources and years of experience to work for each and every client we take on, regardless of how much their case might be worth. While the following results are representative of outcomes we’ve secured for clients in the past and are not a guarantee of a future recovery, we commit to treating all of our clients with the same care and dedication that their cases deserve. View our homepage to learn more about our committed team.

Construction Negligence – $17,200,000.00 recovery
This matter involved a 43-year-old truck driver on a road construction site who was rendered paraplegic when the wing to a concrete crusher came down on him. The case went to trial for three weeks before settling on the morning of closing arguments for $17.2 million total, including monies received prior to trial at a mediation.
Construction Negligence – $6,500,000.00 settlement at trial
This case involved a $6.5 million settlement at trial against multiple defendants involving a construction injury to a 62-year-old floor finisher who fell through a hole which was cut on the main floor and covered with cardboard, resulting in C4 quadriplegia.
Construction Negligence Case Settles for $2,275,000.00
A concrete finisher was working on the lower level construction of a new building when he fell backwards into an elevator pit. He suffered a lower back injury requiring several spinal surgeries by an orthopedic surgeon.

The case settled several days after being assigned out for Trial.

Personal Injury – $2,000,000.00 recovery plus a structured settlement
This case involved a woman who was seriously injured when concrete fell from a building and struck her. The settlement was arranged such that $2 million in cash was paid along with a structured settlement that provided money for the plaintiff’s minor children, a lifetime of medical care for the plaintiff herself, and a monthly payment to her for the rest of her life which was over and above the $2,000,000.

Utility Negligence Explosion – $17,750,000.00 recovery
16 year old girl was badly burned as a result of an explosion and fire in her apartment.  It was alleged that the Defendants were negligent in restoring natural gas service to the apartment building.  The case was litigated with extensive discovery and ultimately resolved at mediation.
Carbon Monoxide Poisoning – $6,200,000.00 recovery
In this case a young girl passed away and her minor brother suffered serious injuries when exposed to carbon monoxide emitted by a furnace. There were numerous parties involved in the litigation, and the case settled with all defendants following several mediation sessions.

Car Accident Mediation Recovery – $2,900,000.00 recovery
Pace Bus made a left hand turn in front of our client’s vehicle.  Plaintiff suffered neck and lower back injuries requiring 2 surgeries.
Automobile Accident – $2,000,000.00 mediation recovery
This case involved an automobile collision in Crete, Illinois, resulting in serious injuries to a 53-year-old man. The lawsuit was filed, and extensive discovery took place prior to the parties mediating the case and coming to an agreement.
Car Accident Neck Injury Settles for $425,000.00
A suburban middle school principal was hit by a left turning vehicle suffering an aggravation to a pre-existing neck injury.  The case was settled without the filing of a lawsuit and after the case was in the office for only 6 months.
Auto Accident Case Settles for $365,000.00
Three children were in Georgia with their grandparents when a collision occurred involving another Illinois motorist. All 3 children were injured including lacerations and fractures.

The case settled after several Pre-Trial Settlement Conferences with a Cook County Judge.

Car Accident Case Settles for $250,000.00
Elderly Plaintiff was involved in a motor vehicle accident which aggravated a pre-existing degenerative condition in her neck. Insurance Company paid its policy limits.
Southern Illinois Pedestrian Struck by Car – $170,000.00
A 60 year old gentleman from Girard Illinois, which is in Macoupin County, was struck by a car backing out of a driveway received $170K settlement without having to file a lawsuit.
Bus Accident – Settled for $150,000 before trial
Client, an 87 year old woman, was a passenger on a CTA bus. As the bus was proceeding East on Jackson, an SUV made an illegal right hand turn from the left lane in front of the bus and proceeded to drive away south on Federal. Plaintiff alleged the bus driver failed to maintain a proper lookout and that it was this failure that resulted in her having to spike the brakes to avoid hitting the SUV which, in turn, caused the plaintiff to fall to the floor. As a result of the fall, Plaintiff suffered memory loss and back pain. Case settled for $150,000 on the eve of trial.

Slip and Fall at Movie Theatre Settles for $250,000.00
Plaintiff tripped over a mat at an AMC Theater resulting in a torn rotator cuff.
Slip and Fall At a Grocery Store – Settles for $240,000.00
A woman was shopping at a grocery store when she slipped and fell on an oily substance in an aisle and hurt her back.  A lawsuit was filed and after numerous depositions of store employees and physicians, the matter settled prior to Trial for $240,000.
85 Year Old Woman Settlement in Excess of $100,000.00
85 year old woman was injured when she tripped and fell on metal pipe protruding from the ground in a shopping center parking lot in Will County. The Romeoville/Joliet area woman sustained persistent right knee instability as a result of the fall and recovered a settlement in excess of $100,000.00.

Wrongful Birth Case Settles for $1,000,000.00 Policy Limits
Young mother delivered her first child who was born with the genetic condition of Spina Bifida. The obstetrician failed to order the appropriate pre-natal test which would have detected the condition in utero and given the mother the opportunity to terminate the pregnancy.

Under Illinois law, the parents are only entitled to compensation for the medical bills associated with the Spina Bifida until the child reaches the age of 18. Case was settled without a lawsuit being filed.  Settlement of these types of cases are extremely rare in Illinois.

Wrongful Birth Case Settles for $975,000.00
Young mother delivered her second child who was born with the genetic condition of Spina Bifida. The obstetrician failed to recognize that the 19 week ultrasound was an inadequate and incomplete sonographic evaluation of fetal anatomy; failed to inform the mother of this and failed to order appropriate follow-up imaging to complete the assessment of fetal anatomy. As a result, the fetus’s open spina bifida went undetected and undiagnosed until birth. Had adequate and complete sonographic evaluation been made the mother would have been given the opportunity to terminate the pregnancy.

Under Illinois law, the parents are only entitled to compensation for the medical bills associated with the Spina Bifida until the child reaches the age of 18. Settlement of these types of cases are extremely rare in Illinois. This is the 2nd such wrongful birth case that the firm has handled in the last four years. Both of which were settled without a lawsuit being filed.

Wrongful Death – Medical Malpractice Case Settles for $1,080,000.00
A 39 year old single man went into the hospital with severe stomach pain.  A CT scan was performed and the radiologist failed to identify a small perforation in the small bowl on the scan.  As a result of the misread CT scan, the corrective surgery was delayed until it was too late and the gentleman passed away.  The full policy limit was paid by the insurance company for the radiologist.
Wrongful Death of New Born Settles for $945,000.00
Young mother went into labor and delivery and after a prolonged 2nd stage of labor delivered a stillborn infant. A lawsuit was filed and extensive discovery took place.  It was alleged that the obstetrician failed to recognize signs of fetal distress and failed to deliver the baby in a timely fashion.
Wrongful Death – Small Child Runs into Traffic on Busy Chicago Street – $310,000.00
A 3 year old girl was struck and killed by a truck when she ran into traffic on a busy street.  Through depositions taken in the case, the attorneys at KFF were able to establish that the delivery driver should have done more to avoid the impact.  The matter settled at Mediation.
Wrongful Death-Patient at Mental Health Hospital Hung Himself – $275,000.00
A man with suicidal thoughts was admitted to the Psychiatric Unit of an area hospital under suicide watch.  He was found hanging in the bathroom at the facility.  The attorneys at KFF alleged that given his history, he should not have been allowed access to the bathroom with anything that might be used to harm himself.  The matter settled at Mediation.

Products Liability – $3,600,000.00 recovery
This case involved a 44-year-old woman who was prescribed the drug combination of Fen/Phen. She developed Primary Pulmonary Hypertension, causing her death. This case was the largest PPH settlement in Cook County.